One of my favorite parts of running an SEO and Analytics agency is developing unique reports. Most of these reports come from real-life, client-based needs. In this case, the issue was assigning ZIP codes to Google Analytics data. The questions were: “Is it possible to assign ZIP codes to Google Analytics data?” and “Can you attribute GA data to brick-and-mortar locations?” A quick Google search returned a resounding answer of “no, it’s not possible”. Still, we recognized the potential value of this data. We understood that advertising campaigns often target ZIP codes based on demographics, and without this insight, marketers do not have a deep understanding of how campaigns are impacting their target audience. We knew that if we could change these answers to yes, the resulting report could provide a tremendous amount of decision support for marketing departments.

It was a perfect challenge for FourFront. Our team includes software engineers, marketers, data analysts, a data scientist, a UI/UX specialist, and a communications expert that all work well together. Over the last few months, we pooled our skillsets, tools, and personalities to develop a report-building app called Geo Report Plus which is designed for clients who target specific geographic regions and need to assign ZIP codes to Google Analytics data. Furthermore, it provides proximity analytics for clients with multiple brick-and-mortar facilities who depend on digital campaigns to drive foot traffic to their locations. If you’d like to try it out, just click here to be part of our beta testing phase. And if you want to know how we did it, then just keep reading.

Since Google Analytics provides location data for each visitor record, our first task was to find out the accuracy of these geocoordinates. According to GA documentation, the location data is derived from the IP address of the hit. The documentation also states that IP-based locations are approximate, which is why associating the closest ZIP Code to the coordinates in the GA record is compliant with Google’s Personally Identifiable Information (PII) policy. What’s not compliant, incidentally, is reading the devices location and storing it in GA variables.

Next, we tested the precision of GA’s geocoordinates by downloading unfiltered GA data into a relational database. This made it much easier to run test queries. We used unfiltered data because it contained known traffic sources for which actual location coordinates could be determined. Then, we compared a sample of geocoordinates to known coordinates around the country. This analysis uncovered some interesting insights.

For larger cities, traffic tends to be consolidated into just a few points. For instance, in our test dataset all traffic from downtown Manhattan (yes, all) is marked with the same geocoordinate of 7128,-74.006. This location is City Hall on Chambers Street. Similar results were found for other large cities. Chicago has 84 ZIP codes which are all designated to 41.8781,-87.6298. This location is almost directly in the center of the city at the intersection of South Federal Street and West Jackson Boulevard. Washington D.C. has 271 ZIP codes which is the most of any city in the United States. All traffic for D.C. is designated to Scott Circle which is the city’s epicenter (38.9072,-77.0369).

What did all of this mean for our challenge? Because of the way that GA consolidates geocoordinates, associating a ZIP code to GA data will not be highly accurate in some larger cities in the U.S. They have much higher accuracy in mid-size cities and rural areas. At this point, we knew that the geocoordinates in Google Analytics could be used to approximate visitor location. They had enough precision in most of the country to align ZIP codes to GA data and provide the marketing insight that our clients were looking for. We also knew that tagging GA records with the closest ZIP code at high volume would require a new system. That’s why we built one (read on).

How Geo Report Plus Works

Geo Report Plus is a hosted system that pulls data from a specified GA profile, processes the data to find the closest ZIP code, and calculates the distance of the user to the geographic center point of the ZIP Code. For now, the data is filtered to include only traffic from within the United States. With this data, Geo Report Plus can create many combinations of reports including “Campaign Traffic by ZIP Code” and “Number of Users/Sessions by ZIP Code.”

In addition, Geo Report Plus can collect data for GA goal completions. By combining visitor traffic with goal completions, it is possible to calculate Ratio of Visitors to Goal Completions by ZIP Code and Campaign (see chart, below). This data can be used to measure campaign effectiveness by ZIP code.

Associating GA Data to the Proximity of a Street Address

Once the ball was rolling with Geo Report Plus, more ideas started to surface. Wouldn’t it be great to report on how much campaign traffic is within the service region of each of our client’s brick-and-mortar locations? Since the system could assign the closest ZIP code to each GA record, it could be used to assign GA data to the closest street address. We made some changes so that addresses could be uploaded and the system could calculate geocoordinates. With this data, Geo Report Plus was able to tag GA data to a brick-and-mortar facility whenever the user was within a specified distance to that address. It could also calculate the distance between user and location. And for users outside the service region distance, records would be marked as out-of-range.

The resulting report (see chart below) turned out to be more helpful to clients than ZIP code tagging. Here’s why. If your campaign depends on getting more people into your locations, then web traffic from visitors outside the service region will detract from campaign effectiveness. Being able to report on campaign traffic within a given radius of each of your locations identifies which campaigns are the most effective for targeting in-range users. This data could also be used to report on campaign attrition based on distance from each location (see chart below). 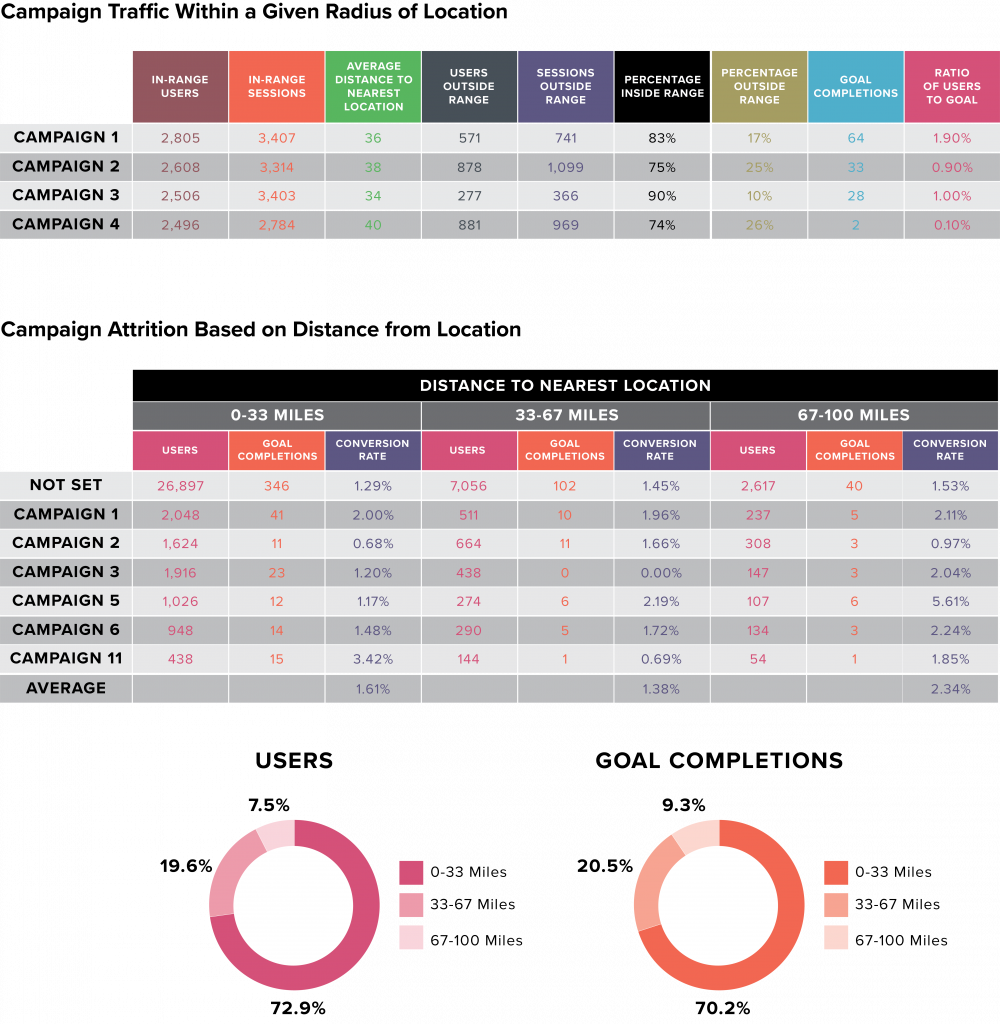 If Geo Report Plus Sounds Interesting…

A handful of FourFront clients have had the chance to use Geo Report Plus. The response has been extremely positive. In fact, we are getting a lot of requests for additional reports and features. If Geo Report Plus seems like it might help your business, please contact us and we’ll be happy to set it up for you. The user interface is currently in the beta testing phase and we would greatly appreciate your feedback. 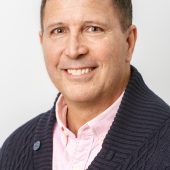 With 35+ years of experience in technology and business, Bob is an expert programmer, software engineer, and digital marketer. Read More
Was this article helpful?