How to Get Star Aggregated Ratings in Google Search Results 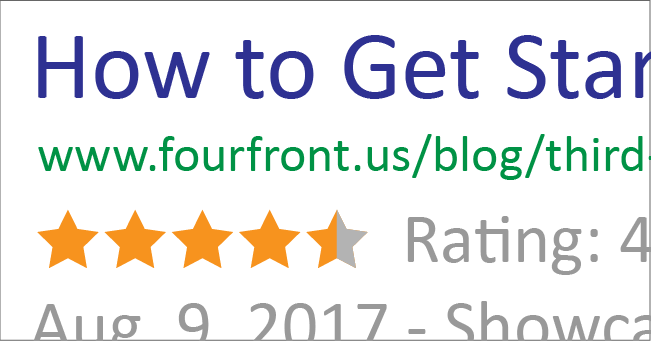 Note: Originally published in 2017, this post has been updated regularly with additional information, most recently in June 2022.

Adding star ratings to your website’s search results on Google is a great way to stand out in organic search by showcasing the quality of your business. This can be quickly achieved by installing Schema markup code on your site. But, it’s important to avoid unnecessary ranking penalties by following Google’s rules and recommendations regarding first-party and third-party reviews.

That’s right: It’s not just a plain old average but a score based on user ratings plus “a variety of other factors,” according to Google. (It’s also important to keep in mind that new reviews may take up to 2 weeks to be published and affect the average score.)

The Benefits of Star Ratings in Your Search Result

Positive customer reviews and high ratings are shown to build trust among prospective customers in all industries. In SEO, we like to think of this as building authority – which is part of an important concept Google uses called E-A-T that ranks websites who sell products, services, or offer information that can impact an individual’s health or financial status if acted upon.

While third-party sites like Yelp, Facebook and Google provide trusted avenues for writing and reading reviews, it’s also a good idea to showcase great comments and 5-star ratings on your website. This can be done by embedding reviews from those third-party platforms, or by collecting and publishing reviews directly on your site—and its that second option that could affect your search results.

You’ve probably noticed that some sites include star ratings in their Google result. This is especially popular for ecommerce results, like something from Amazon, and especially sites that list products like movies and DVDs. 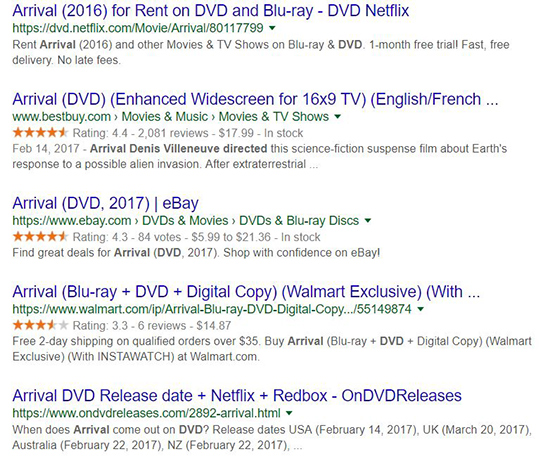 However, the ratings strategy is increasingly being used by non-ecommerce brands, too. And for good reason—including star ratings on a search result can not only polish up your website’s very first impression, they can also help it stand out from the crowd. According to a 2016 Yext study, there is a 154% increase in clicks for a 2nd position organic search result when it features stars.

Here’s an example of star ratings helping a pressure washing company stand out in the Brentwood, TN market:

This is the power of review snippets. On Google, a review snippet is a type of rich snippet that displays stars and other information on the Search Engine Result Page (SERP). These are available for Products, “creative works” (movies, books, or music), and Local Businesses.

The way to get a review snippet on your site’s search results is by installing AggregateRating Schema code. But before jumping into installing this code, let’s cover a few potential pitfalls you need to watch out for.

Google provides (somewhat) clear rules about what is and is not allowed to be used in your aggregate reviews schema. These rules were updated in 2017, and this very last bullet from that update was the key requirement:

“Only include critic reviews that have been directly produced by your site, not reviews from third- party sites or syndicated reviews.”

This means that any reviews you use to generate an “aggregate rating” for your review snippet needs to be a first-party review. In other words, you can’t copy and paste reviews from third-party sites (Yelp, Google, Facebook, etc.) and then mark those up on your site with schema code: the ratings must be original to your website!

The “first-party” reviews you’re allowed to use could include reviews left on a product purchased through an eCommerce site (like the reviews you see on Amazon) or a general review sent to your customer service team through the contact page.

There are now real consequences for marking up third-party reviews. If Google detects any issues with your reviews—which apparently does happen—then your site will receive what’s called a “spammy markup penalty,” which means:

Google has detected some of the markup on your pages may be using techniques that are outside our structured data guidelines, for example marking up content that is invisible to users, marking up irrelevant or misleading content, and/or other manipulative behavior.

As a result, Google has applied a manual action to the affected portions of your site, which may affect how your site is displayed in search results.

This will cause your ratings to be removed from your Google search results, and you could eventually see your site’s ratings tank.

If you have made the mistake of marking up reviews that you shouldn’t have, you should see a warning in Google’s Search Console tool. Here are the steps you should take to resolve the issue:

How to Install Schema Code for Star Ratings

Okay! Now that we’ve reviewed the pitfalls, here are the basic steps for installing the code you need in order to get star ratings in your Google search results.

First, you will need to figure out what kind of “AggregateRating” Schema code is right for your situation.

It’s important to note that there are several entity types for which you can apply ratings through Schema markup, and they have different parameters and requirements—both Schema code requirements, and Google requirements.

For example, Google states that you should only include the Reviews Schema code for Local Businesses on one page of your site. However, you can install ratings for things like products, events, books, and “creative works” on multiple pages of your website.

As of September 2019, Google allows aggregate rating rich snippets only for the following structured data itemtypes:

You might notice that the “BlogPosting” itemtype is not included in the list above. That’s because even though you could markup a blog post’s star ratings, they will not be used by Google to show stars in search results. (Some websites seem to get around this by using the “Product” itemtype for a blog post, and it’s unclear how risky this might be in terms of Google penalties.)

2) Install the schema code on the page

Once you know what kind of Schema code you need, then it’s time to figure out how to put it on your site. (Well, you still need to figure out how you will generate those first-part reviews, too. But there is more on that below…)

Remember to also choose the best page to place the code. For a LocalBusiness review, for example, you will probably want to markup a “Reviews” page or maybe an “About” page.

Here are some of the methods you might use to install the code:

Here’s what you will want to do after you’ve installed the code:

How to Generate First-Party Reviews

As discussed above, third-party reviews can’t be used in this particular endeavor, but there are a few options that will help you in generating the first-party reviews Google requires.

One of the easiest review generation strategies is to install a reviews plugin on your site. This is especially straightforward if you’re using WordPress since there are lots of plugins to choose from. (As an example, I’m using the Yasr – Yet Another Stars Rating plugin below to allow users to rate this post.)

Another option is to begin a review-generation program. This could be self-initiated using survey tools like Survey Monkey or Google Forms, however, it can be tricky to convince Google that the users are authentic if they didn’t need to login to your site before posting the review.

Yet another option is to partner with a review generation service provider. For example, FourFront offers access to a business citation management platform for our clients, which includes powerful local business information management services as well as a review solicitation tool. First-party reviews generated through this platform can be automatically added to your website—and will already have the appropriate Schema code included. This can be a great option for businesses looking to improve local SEO—especially if you are managing many locations at once.

After completing the steps above, some people may be frustrated that star ratings are still not showing up on Google.

Here are a few reasons that might be happening, and what you can do.

How To Improve Your Existing Google Star Rating

Installing the schema code to generate Google star ratings for your website is only the first step in maintaining your brand’s organic search reputation.

While all business owners will hope that their customers love and appreciate the products and services they provide, there’s always the possibility for a negative review to trickle at some point. Not only does a negative review reflect poorly on your business, but it also has the chance to lower your star rating average on organic search results – especially if your business only has a small pool of reviews for Google to average.

Luckily, there are a couple of clear ways to engage with negative (and positive!) reviews to ensure your business maintains its digital reputation with a high Google star rating:

We hope you found this guide helpful! If you did, please leave a comment—and rating—below to let us know what you think. If you’re looking to pair your website’s newly-created star ratings with a more comprehensive SEO strategy, get in touch with our team of SEO experts today to learn more. 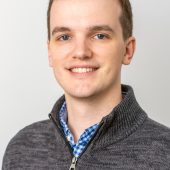